The journey to our little girl in China

(This post about Lydia’s Second surgery has been sitting unfinished for months, finally found the time today.  Life has been moving too quickly!)

What a trooper Lydia is!  September 4th was on our calendar for four months.  We were ready, we had all our childcare figured out, thank you Mormor.  We packed our bags, arrived on time, got up to the check-in area and then…we were told, “no, I don’t see Lydia’s appt here. Oh, wait here it is, in the clinic.”  Huh?  What?  My heart sank and on we walked down a corridor, to a bridge connecting the maze of buildings and over to the clinic.  The clinic…where we had an appt, for nothing.  We got many quizzical looks from reception staff as we stood suitcase in hand.  Back we went into the clinic area and in came our Dr.  He was puzzled, we were puzzled.  Lars said, something like, we’re a bit confused at what happened here.  And the Dr. explained he wasn’t sure but, that he did not do surgery on Thursdays.  I sat, stunned, so disappointed.  Oh, and mad.  I couldn’t even look at the Dr. until her gently took my arm and said, “Are we okay mom?”

No.  We were not ok.  We had this date on the calendar for months.  We planned, we prayed, we packed, we prepared the boys, my mother had stayed at our house on the couch the night before.  I so wanted the surgery to be over-with.  The anticipation was hard.  So, no I was not ok in that moment.

I  took a deep breath, tears welling in my eyes as a resident and the geneticist talked with our Dr. confused as to why we were there, after Lars had already had the 5 hour long appt (alone, with a two year old) in early June in preparation for the surgery.  The Dr. offered that maybe the appt was made so we could sign the consent forms.  Lars noted he had already done that at the last appt.  Silence.  Quizzical looks.  More silence.

The Dr. apologized that the surgery would not be happening that day and offered another date.  The 10th.  I texted my mom to check her availability to take care of the boys.  I continued staring at the ground, not wanting to cry.  Again the Dr. apologized for the mix-up.  We scheduled the appt. for the 10th and we left in a fog of ‘what just happened?’

Lars drove in silence as I texted family saying, ‘no surgery today, scheduling mix up.’  And then Lars broke the silence as he remembered what happened.  At the last appointment.  Our Dr. the surgeon who had been with Lars and Lydia on and off for a couple hours, walked into the waiting room, said, “Let’s get that surgery scheduled” and then sat Lars down…at the wrong desk.  So instead of a surgery appt, Lars got a regular clinical appt.  That was that.  Simple mistake.  And after hours of chasing Lydia into every specialist clinic room that day, Lars didn’t ask questions, he simply sat down and the appt was made.  Aw sugar!

A SUPER unfortunate, simple mistake, right patient, right Dr., wrong desk.  And for as mad as I was at the inconvenience of it all, and the emotional roller coaster that the day was, I landed on the simple truth that everyone is allowed to make mistakes…just glad it was in scheduling and not in surgery.  😉 We will never know if their was greater purpose, behind the changed surgery date, but perhaps.

So… fast forward to Sep. 10th.  Same prep, same packed suitcase, same valet parking, same prayers.  This time all was a GO.  We sat in the waiting room with another family whose daughter was in surgery, having the same phase two palate repair surgery.  Lydia made herself at home, inviting the grandmother to have tea with her at the play table, even borrowing their little girls purse and pretend cell phone as she walked around the waiting room.  They were a very generous and lovely family, waiting for their 18 month old daughter, Melissa to come out of surgery and into recovery. 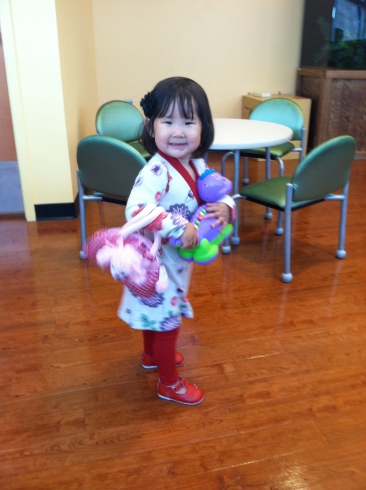 Finally they got word Melissa was out of surgery and back they went, relieved I’m sure.  Then it was our turn to be called back.  Lydia played in another waiting room, where she was measured and weighed, (as was her baby doll, named Baby).  Then she changed into her little hospital gown, and we met the anesthesiologists and the patient care representative who came in to give Liddy a little home-made looking doll.  Lydia looked at the doll and promptly threw it across the room, reaching instead for Baby, as if to say, “Thanks, but I’m good”.  Heaving it onto the floor felt  a bit rude, although I will say the doll had button eyes, which I find unnerving myself, so ah-well, what are you going to do?  It was now 2pm and Lydia had not eaten for many hours so she was hungry, and had missed her nap.  Then our Dr. came in and said it was time.  We walked toward the red line, painted on the floor and handed her over.  She went semi-willingly  with a few whimpers and the group of Drs. passed through the doors.  We walked back into the waiting area, I had some tears, and then we left to get lunch. 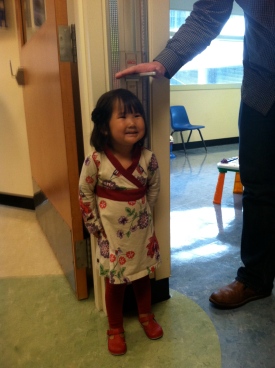 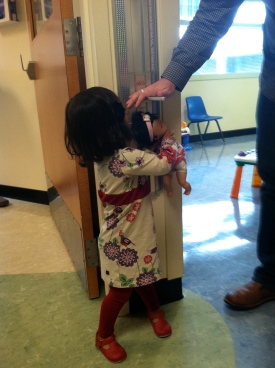 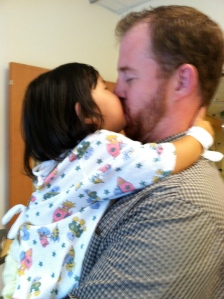 Then began the wait.  We texted, we read, we checked Facebook, finally Lars decided to nap in the recliner chair and I sat.  We got two phone calls, one in the beginning of surgery and one in the middle saying all was well.  The surgery went longer than expected and finally at close to 6pm the Dr. came out and said, all was done, he was able to use all her own tissue, and that things had taken longer, because of all the waiting involved in using her tissues. This made some, not much sense to us as non-surgeons.  But using her own tissues seemed the best idea, right?  He attempted to explain the surgery, and honestly, even after watching a youtube about it, I still don’t understand.  I’m just glad that our Dr. spent months of medical school learning how to do it, and do it well.

We were walked back to recovery.  The nurses noted that Lydia was very agitated and upset and had been pulling at her monitor cords.  She was crying, confused and in pain…until they put her in my arms.  She calmed immediately and all was right with the world.  Oh how I love her.  She rested.

Behind a curtain in the bed next to ours was a little boy, from his sobs, he sounded to be Albin’s age, maybe six or so.  He was clearly in a lot of pain.  His father spoke what sounded like Mandarin to him in attempts to calm him.  The boy continued to cry and then we began to hear quiet sobs from the father.  The curtain remained pulled as the nursing staff looked at orders and gave him more pain meds.  And then we heard two Drs looking at the boys chart, and one said to the other, “Well it was pretty major surgery.” Then the mumbled ‘something…Sarcoma’ and then talked about removing the boys arm.  We continued to hear moaning from the bed next to us.  That sweet boy and his heart-sick father…  I was so overwhelmed to imagine what the father was thinking, how grateful, yet grieved he must feel for his young boy.  I was also overcome with the reality that Lydia’s surgery, though intricate and challenging, was a ‘corrective surgery’.  She was being given something-the ability to develop speech.  I sat holding her and cried for the little boy.

It wasn’t much longer before we were admitted and sent up to our hospital room.  A room at the end of a hallway.  We were sharing it with the other little girl who had cleft surgery just before Lydia.  Once we settled in the night went by quickly.  Lydia was certainly more uncomfortable than with the last surgery.  She whimpered and cried more and was much more swollen, but still she slept comfortably in my arms.  Early the next morning her surgeon came to check on her.  He noted that we should get out of the hospital asap as there was a terrible respiratory flu going around with many patients on our floor.  He explained that the ER was full with children with the virus the night before and that he himself had taken another exit so as not to have to even go near the ER.  Shortly after he left I worked to get Lydia to eat and drink something, as that was out ticket OUT!  She was a trooper.  She was so sad and so out of it from the pain meds, but she did manage to drink something.  Sweet girl.  The attending came in to check on us and I asked if we could please go home.  He took a look at Lydia and said, “Yes, I’m sure she’ll be more comfortable recovering at home.”  And an hour later we were discharged!  Hurray!  Less than 24 hours beginning to end! 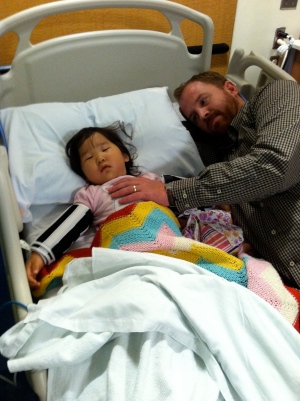 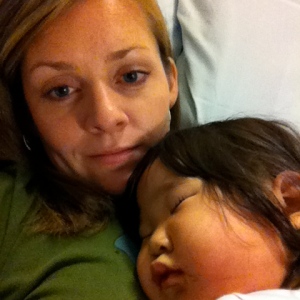 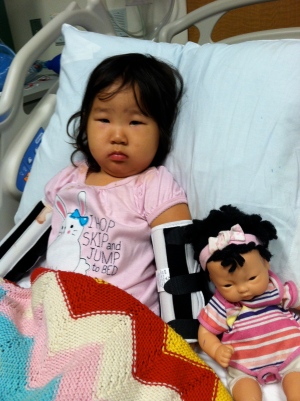 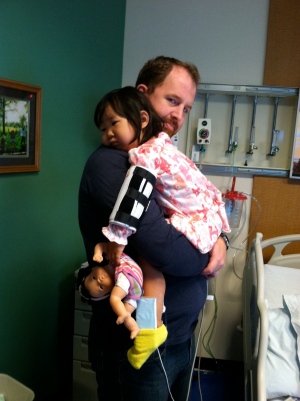 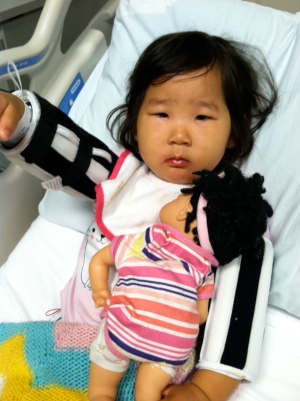 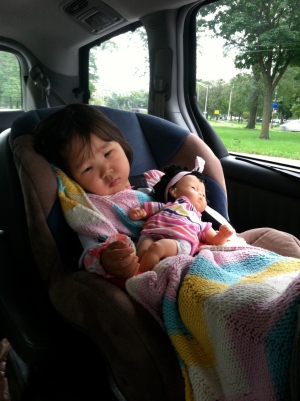 Liddy had a rough night at home and by day two she perked up and was back to playing and eating.  Eating lots of milkshakes and pediasure drinks.  Yum!  She continues to amaze us with her strength.  She’s a tough cookie and we are so amazed at how she has handled these surgeries.  Our hope is that this will be it for a good long while. 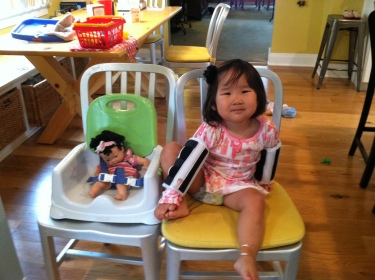 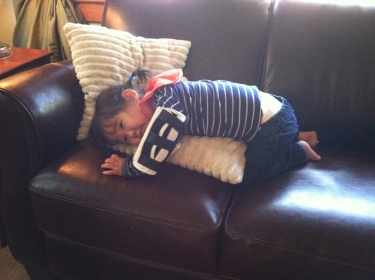 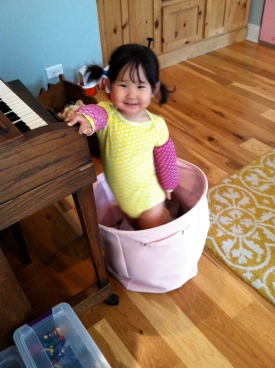 Two weeks after surgery we went in for a post-op appointment and the surgery was officially deemed a success!  And now months later, the roof of her mouth is pink and fleshy, looking almost totally normal a bit less smooth, but fully closed.  God is good. Now it’s on to more Speech Therapy.  This will be our road to travel together with Lydia.  She can not form many sounds, most sounds really.  So we have a ways to go, and lots to learn.  But how grateful we are for Illinois’ Early Intervention program and our School District program which happens to be at the boys grade school. 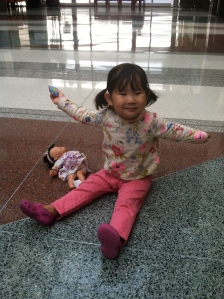 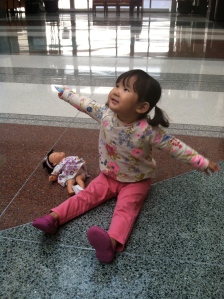 So happy to have her ‘no-no’s off!

And we remind ourselves, she’s only two.  She will get there, in her time, with the help of many.  But oh man, I can’t wait to hear that little voice of hers speak in sentences someday.  Lydia is such a smart, curious, delightful, willful, funny and affectionate little girl and I’m positive once she starts talking, she won’t stop, because it’s clear she already has so much to say!  🙂